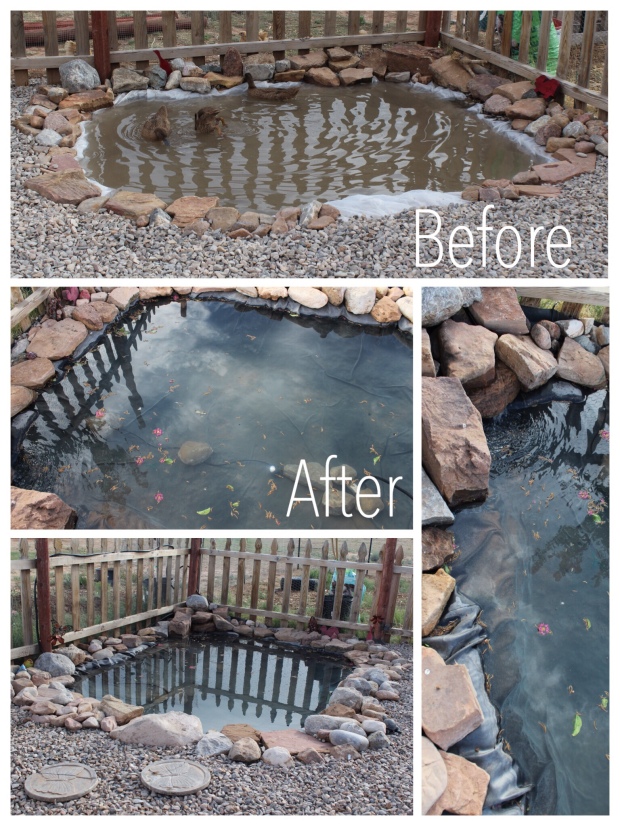 This is kind of a late late post. See, back in March, we were getting ready to start digging out an area for the ducks to have a pond. Before we could even begin, one of the ducklings was bitten by a snake and passed. We were so sad and angry for not hurrying up. So, with our budget being limited we had an idea that we would make them a temporary pond we’d empty out every so often until we could afford an actual pond liner and pump/filtration system. We started digging where our kids play area was as it was too small for them now anyway. It was already fenced but we added some wire mesh around the back and chicken wire in the front to ensure no snakes would be able to get in. The dogs hang out in the front and I would be able to see it from our front living room windows so we thought the chicken wire would be ok. Plus we ran out of the other stuff, so, yeah. Back to the digging, my husband would break the dirt with a pick axe and i would shovel it all out. Taking turns, me digging a little bit here and there while he was at work, It was finished within a week with a total of 8 hours of labor. 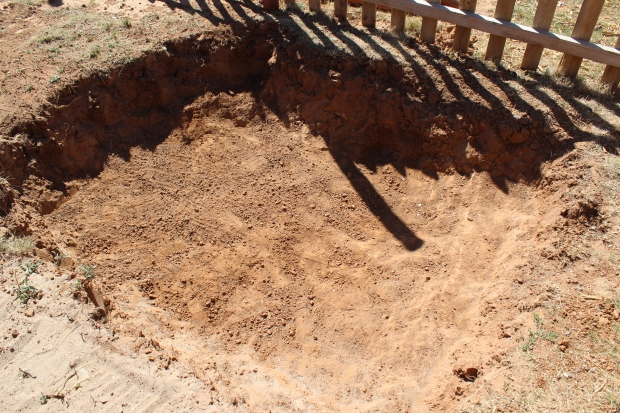 Hubby bought some thick painters plastic, a 10×25 that we cut in half and laid a double layer down in the pond hole. 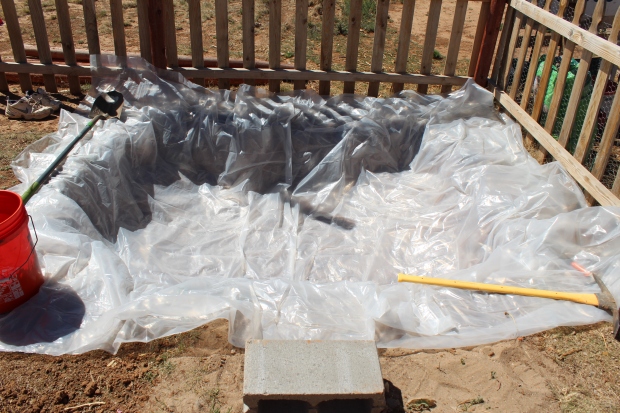 We nailed it down with some 9″ nails just to hold it in place. 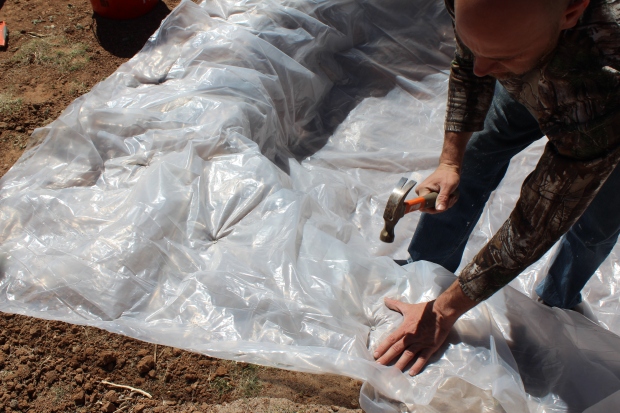 After that we started to fill it up and brought in the gravel rock to cover the edges of the plastic. 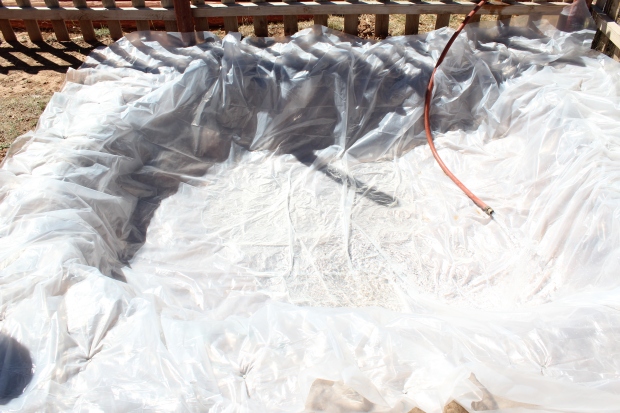 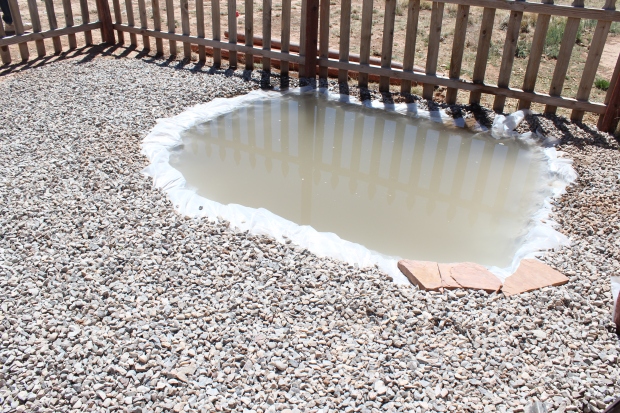 We let the ducks in and they sprinted to the pond! They were soooo happy! 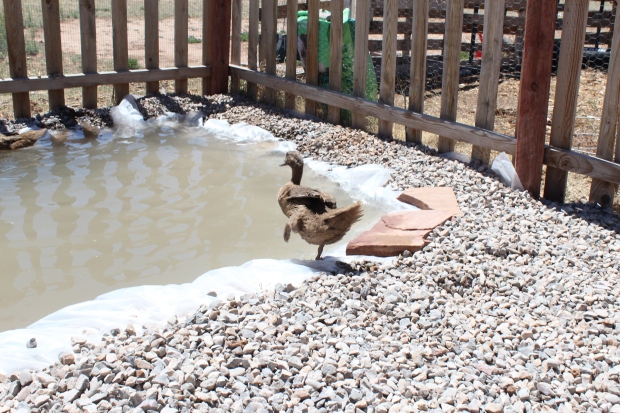 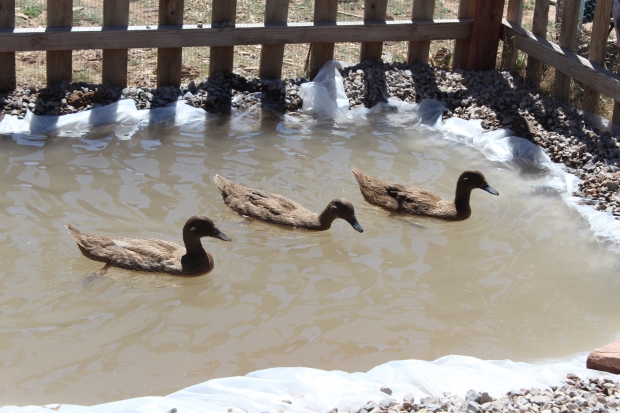 I remembered seeing some landscaping rock on the other side of the property where there had been homes before. I took the truck over there and loaded up as many as I could. I had to be very careful of snakes since that side is basically abandoned. I did run into a bull snake but luckily no rattlers! I placed the rocks all around as best I could since we didn’t really think about doing that before we filled it with water. 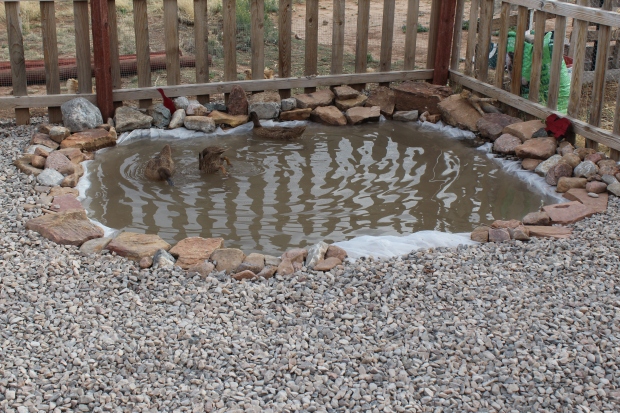 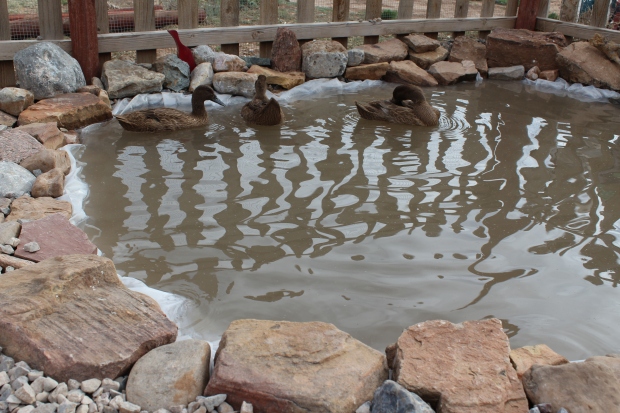 The ducks seemed to be very happy and it was great for the time being, until the pups decided they would jump over the fence at the entrance of the duck enclosure and have a swim. They scratched the top layer of plastic that left holes where water could go under in between both layers. There, algae started to grow and so every time we emptied the pond and put new water in, it immediately would get green again. We did our best to keep it clean using baking soda and a small amount of Clorox but of course we had plans to redo it anyway so we didnt worry too much. We used a submersible pump to pump out the water into my garden or the grass around the front yard and that worked great for feeding the plants and growing the grass.

Fast forward to this past weekend in June when we were finally able to get the pond liner and pump. Ken picked out a pump that had an LED light with the intention of using it to light the area where the waterfall we wanted to create would be. I got to work raking back all the gravel while the pond water was being pumped out. Ken picked up all the rocks and placed them aside. We then removed the plastic liners. If it weren’t for the dogs jumping into the pond and making those scratches on the sides the painters plastic would have held up great! We’re talking about the Great Pyrenees pups here that are over 80 if not already at 100 pounds. The plastic sheets worked great and were an incredibly cheap temporary solution for our ducks to have a pond. There was absolutely no water leaking through that second layer. We could have just removed the top layer and left it like that for longer but we were also ready to upgrade the pond.

Ken had an idea to make it a bit bigger so we started digging again towards the side so it’d be longer but the plastic kept the moisture underneath so well that the ground was sticky and heavier to shovel out. We did about a foot out and called it quits, laid the pond liner which by the way is so thick and felt super sturdy. This time around we placed the rocks before filling it up with water. We went back to the other end of the property and this time with the help of Ken we brought a whole lot more rocks to fill up the edges of the pond nicely. The ducks had been knocking in some of the not so big and heavy rocks so we made sure to change up the placement of the rocks. I arranged them how I wanted and then pushed the gravel back over the lining while Ken placed the pump and the LED light where he wanted. He used rocks to hold it all in place so the ducks wouldn’t be able to mess with them. When we were done we then started to fill the pond again! I was so excited! More than I should admit. Before I forget! We brought home some shade trees to put by the pond and in the garden! I AM so excited for those trees and I am not afraid to admit that! It’s going to look so lovely that I just want to fast forward a couple of years…or maybe not! 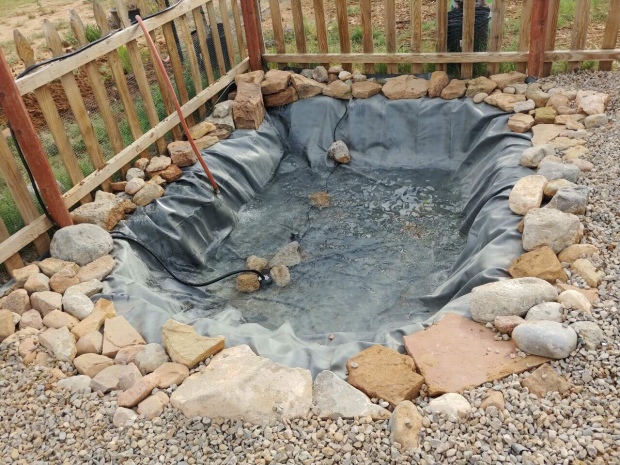 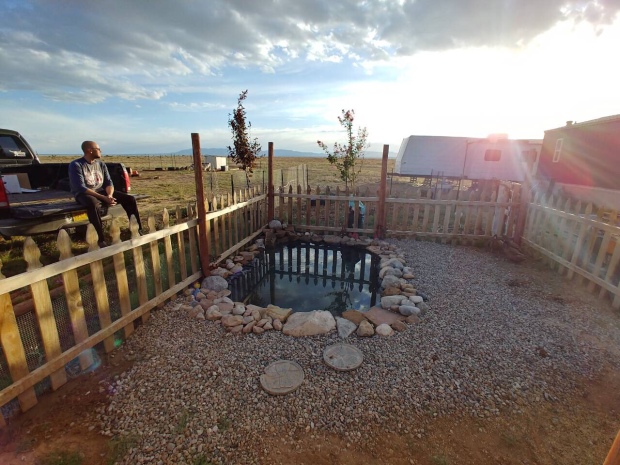 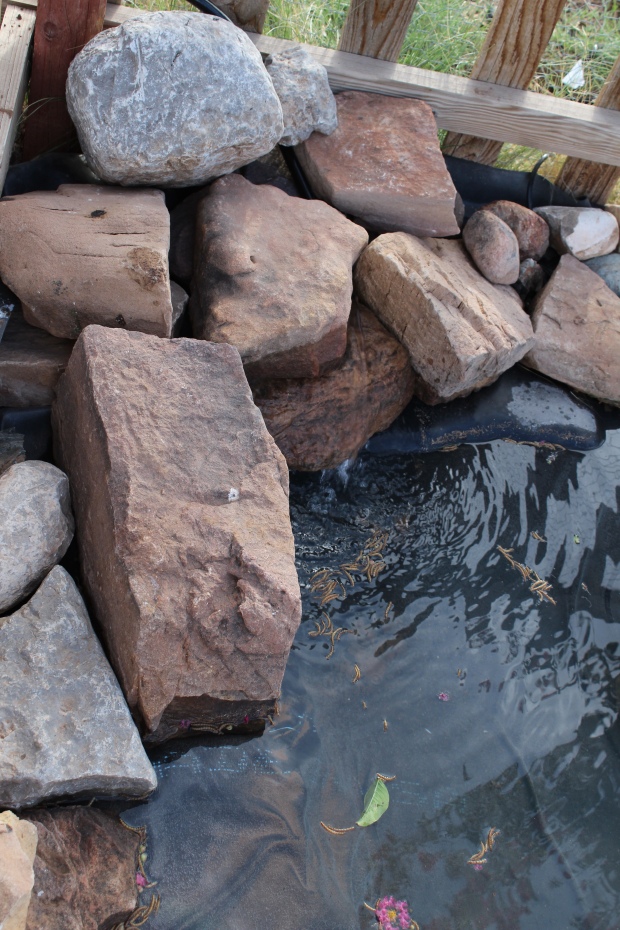 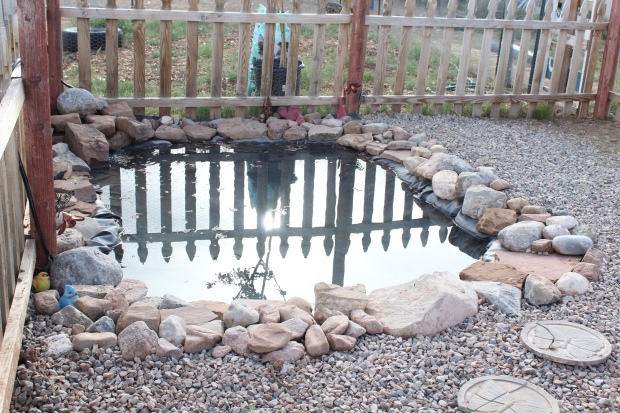 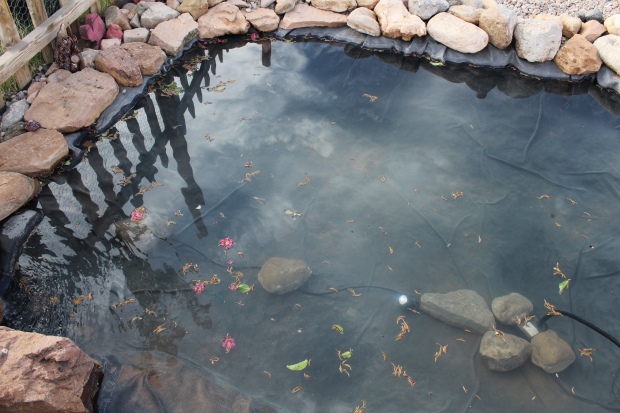 Now all we have left to do is create some sort of filtration system, which we have an idea of how we want to make it. From the three ducks we have, one is a Drake and they have grown beautifully. I absolutely love and enjoy having ducks but it makes me so sad that they hate us so much. Lol. They really do! It’s been a whole day and night since we changed the pond and they haven’t set one foot in nor drank any water. I have no idea why! Im sure they’ll come around but we’re kind of bummed out that they’re not happy with it right now. We were so excited for them! Ungrateful brats I tell ya! I’ve thrown mealworms in the pond to coax them in but it hasn’t worked. I plan on taking a lot of the gravel rock out. Hubby insisted that we fill the whole place up for fear of them tracking mud into the pond but it was overkill. The ducks don’t like it as I think it hurts their feet. So I’ll take a lot of it out and hope some grass grows. We also want to bring them some potted plants and bushes for even more shade. 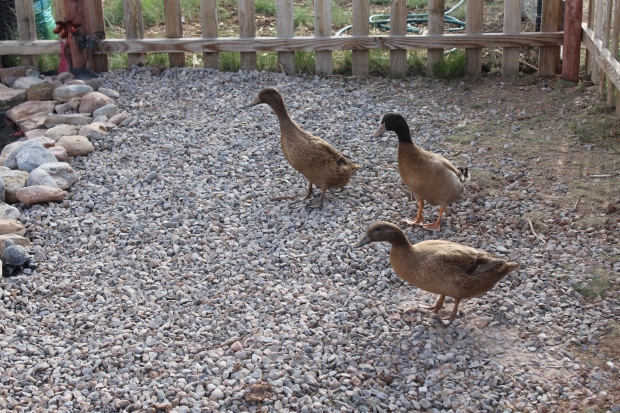 My garden area was upgraded as well. We removed the pallet fence, made the area bigger and did the wire mesh. It helps keep out the grasshoppers and lets me see the garden better. Although, I have only planted a couple of things this season. Something I haven’t posted about is that we were unsure if whether or not we were going to stay here. Thats a post ill have to write next! Anyway, for now we’ve decided to stay. For now. So we are continuing doing things. Which is another reason why Ive been M.I.A. Just trying to figure things out!

Since we’ve had the pond the bird population around us has slowly migrated towards us! The amount of bugs this year has gone down tremendously with the help of our little wild bird friends. I see them eat from the ducks feed and drink from the pond daily. Doves, purple martins and these little cute birds with a burgundy and blue color I’ve yet to identify. I love that our little pond provides for not only the ducks but wildlife as well. We did it with the mindset that it would become a place for the birds, bees and beneficial bugs too. 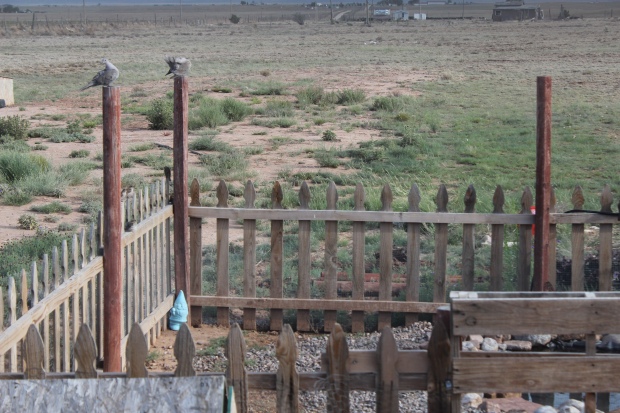 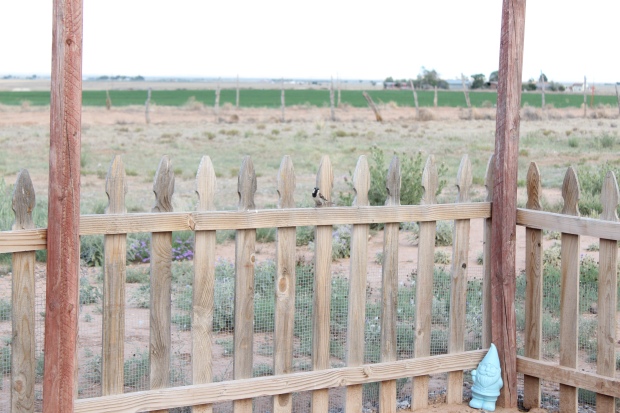 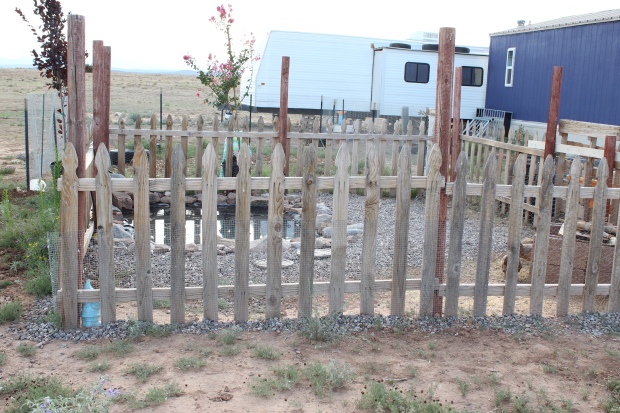 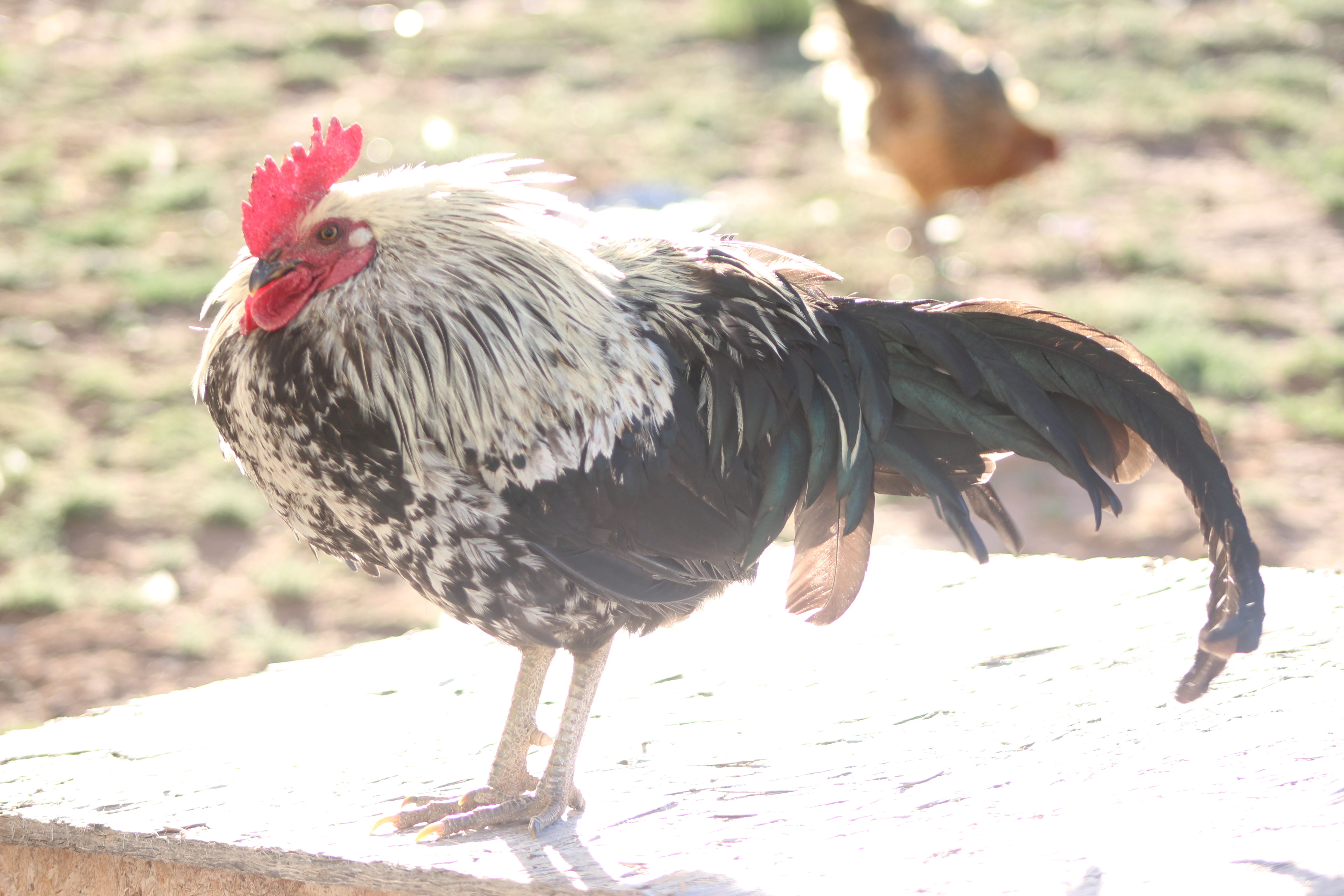 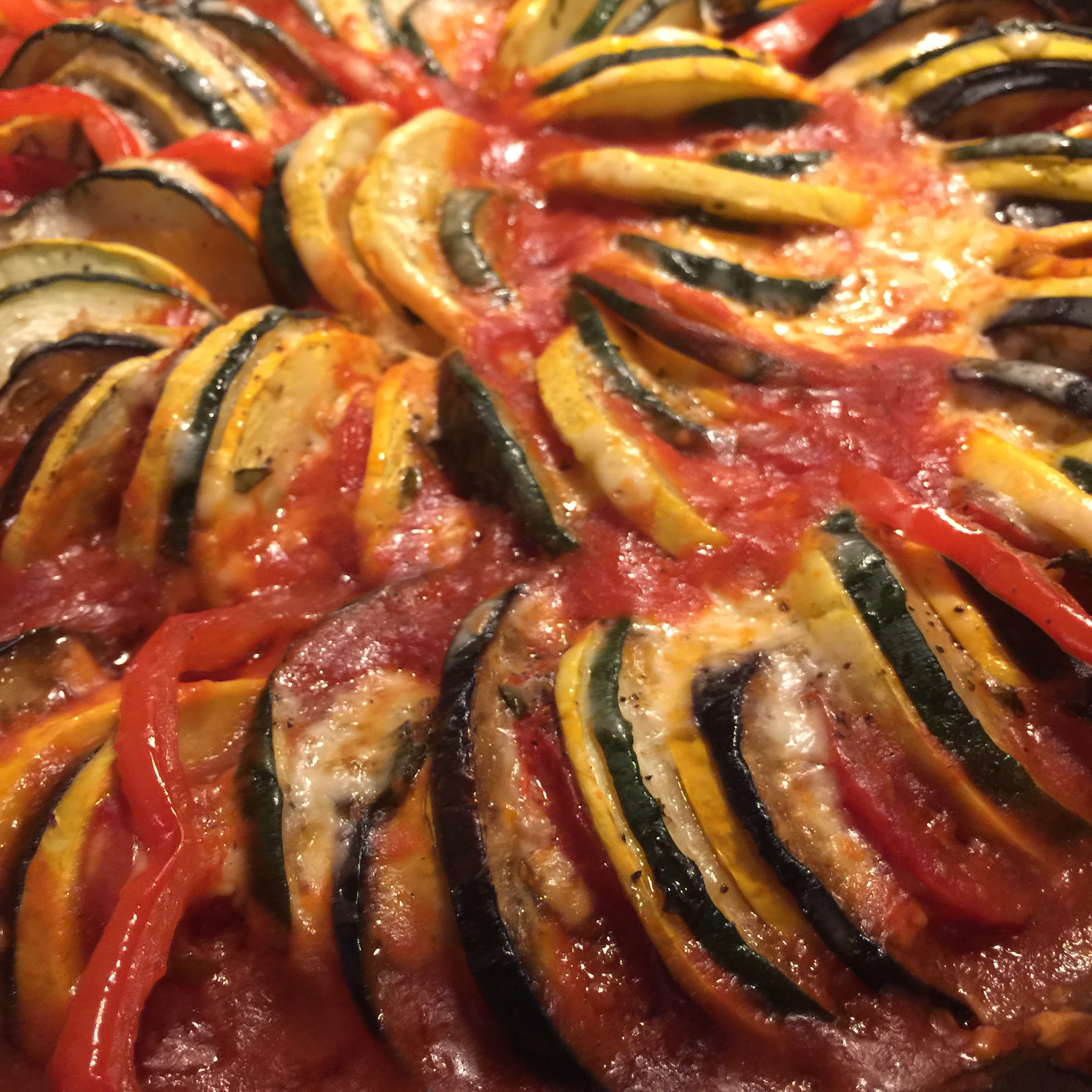 Our Garden is finally contributing to our dinners! 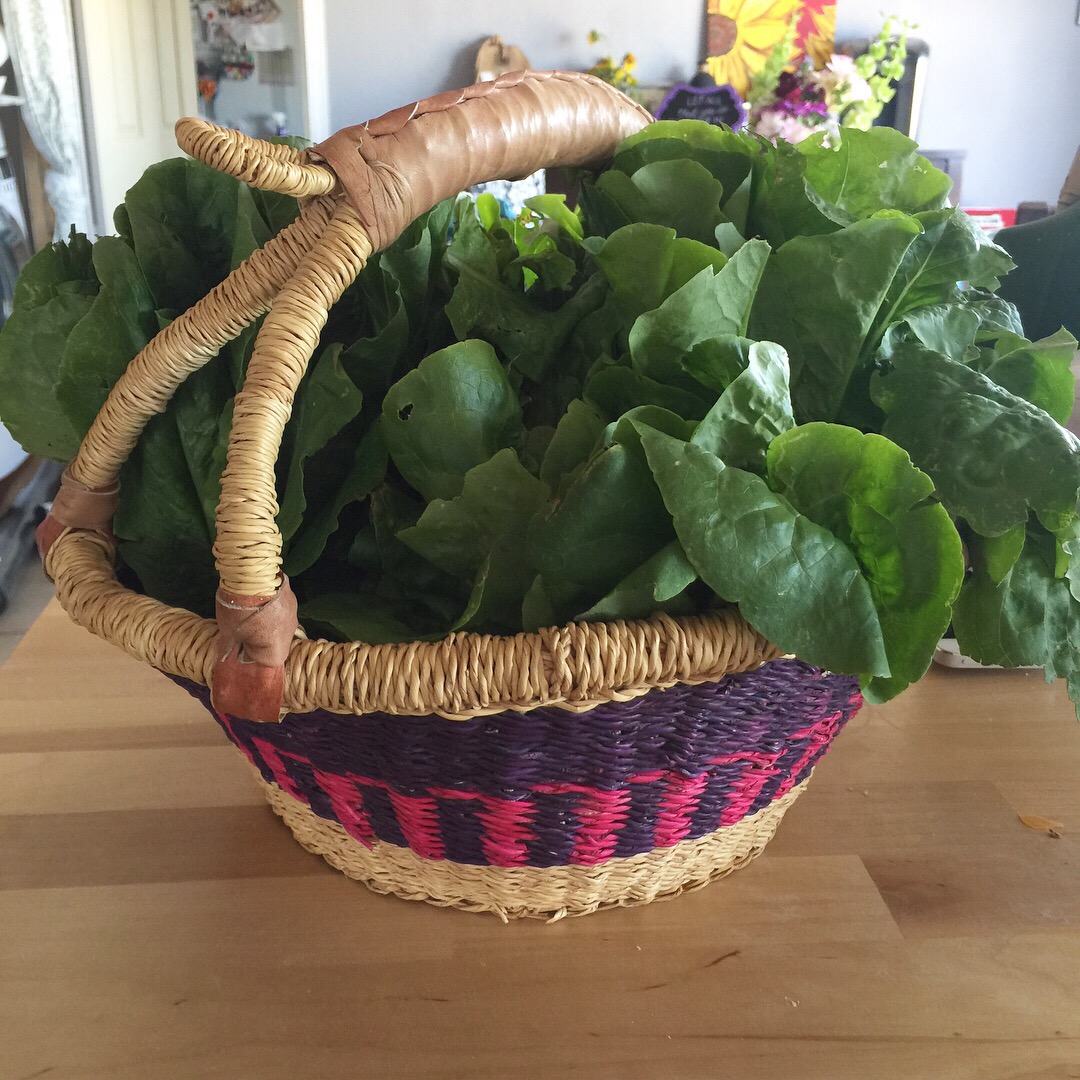 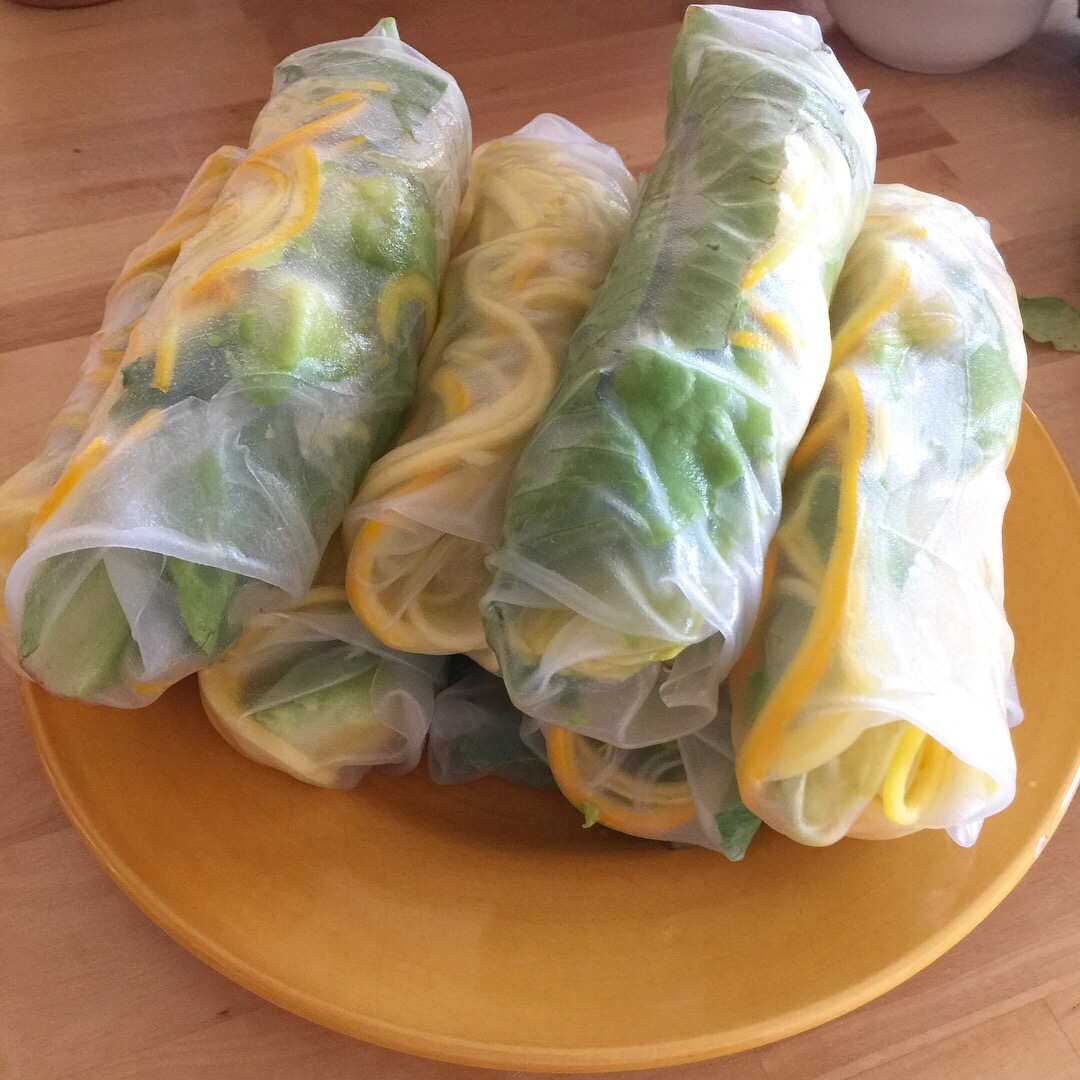 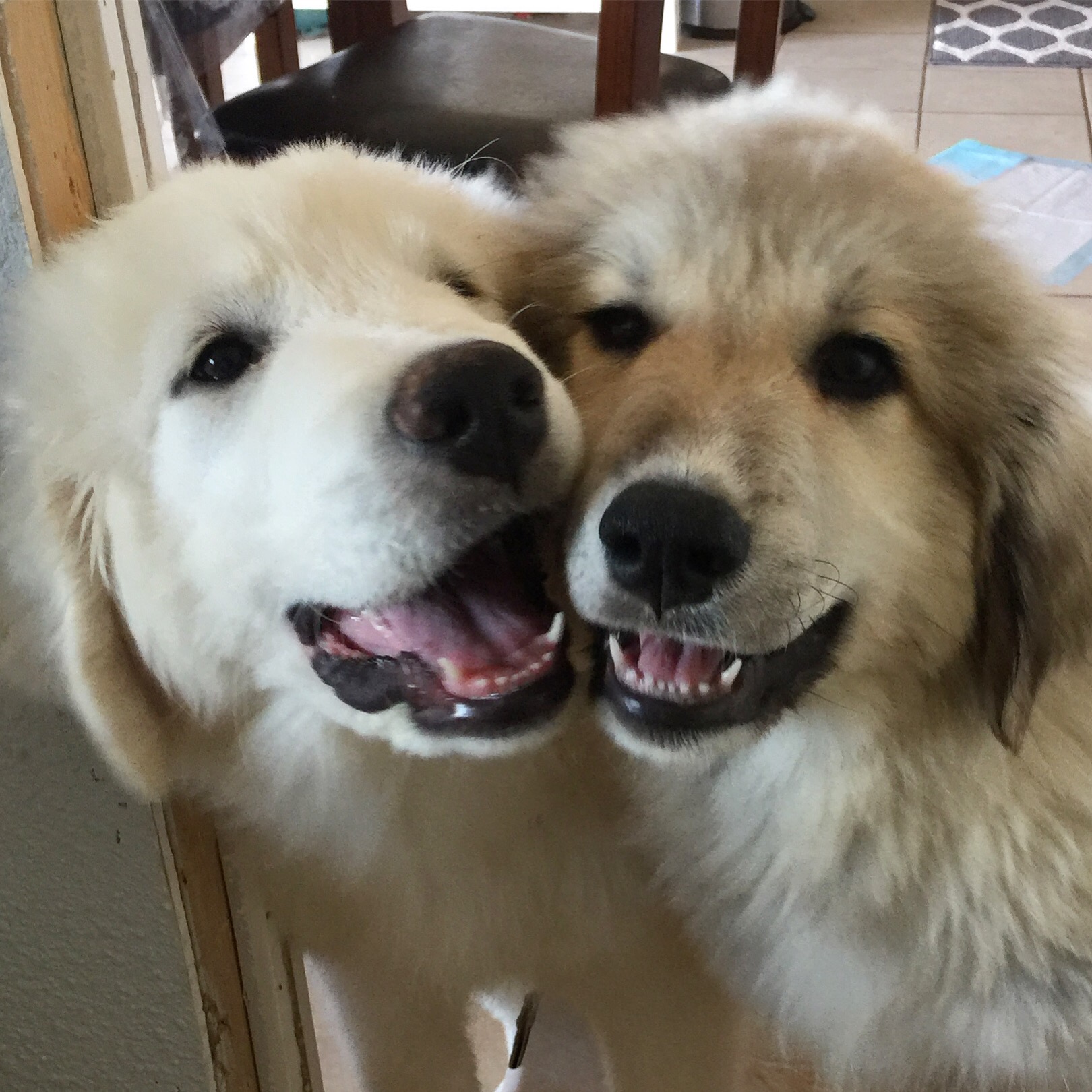 Happy three months to these boys <3